The North Zone has scheduled three days in March as VHF practice days to exercise the VHF infrastructure, provide hands on conventional radio use during routine incident operations, and to identify issues with existing VHF infrastructure, coverage, and equipment. The goal of these practice days is to improve familiarity with VHF equipment operation, and expand user skills, knowledge, and abilities with the use of conventional radio process.

Schedule:
There will be three dedicated for VHF practice, starting at 0800. Because of inconsistency in shift change among our departments, the drill will be ending at 0700 on the first and third days.

General Operations:
At 0800 on the day of the practice, the primary dispatcher will make a general announcement over 3A using alert tone 1 that all new calls will be run on VHF. Any existing calls will remain on the RCS. Each radio dispatcher should monitor both the assigned VHF channel and the RCS talk groups.

Units will be operating on command and tactical communications plans. This means they will only be talking with us on the command channel and will talk with each other on the tactical channels. As we are not monitoring the tactical channels, this means we should hear less radio traffic. Because of the way VHF radio operates, the agencies will be divided differently than under normal operations. See below for the assignments.

When communicating with us, field personnel should be verbalizing the channel and tone they are on. This is not necessary to parrot back, but is in place to help us respond on the appropriate channel given the limitations of the RCS group.

At any time, any unit or IC may request the incident communications plan be returned to the RCS. This would be more likely to occur on structure fires or other first alarm incidents. Be sure to assign the correct RCS talk group.

At the end of the operational period, the primary dispatcher will make a general announcement using alert tone 1 that all new calls will be run on the RCS. Any existing calls will remain on VHF. Each radio dispatcher should monitor both the assigned VHF channel and the RCS talk groups until all VHF calls are closed.

Call Taker:
Because each call will be automatically dispatched and voiced once it is entered, the call taker will need to ensure that they change the primary tac channel on all incidents before entering the call type. Because of this change, the call taker is responsible to document the comm plan in the notes of all calls. The best way to do this is to use a shorthand comment of the 3 letter agency abbreviation, such as “/CBD”. The shorthand comments have all been updated.

Primary Dispatch:
At the beginning of the drill, the supervisor will add XSD CMD 5 to the console patch with 3A and 4A. Samantha will broadcast alerts over all three channels. XSD CMD 5 will also be used in place of 3-Bravo and 4-Bravo for administrative radio traffic. Crews have been reminded to keep traffic short, and Samantha is set up to hold her announcements while the channel is in use. There will probably be an increase in units calling in for status changes because of this. 12A will remain the strike team travel channel.

For air ambulances, field units will be talking with the airships on CALCORD. We won’t be monitoring it, but they might have issues communicating because it does not have wide area coverage and they won’t be able to communicate until they are closer, possibly even within line of sight.

In the event that you are communicating on one of the old VHF Links, note that the RCS talk groups “VHF 1” and “VHF 2” are referring to pieces of hardware and not actual channels. If needing to use the name of the channel while attempting to hail a unit, state, “North Comm, E211 on XSD CMD 6”. While VHF 1 is linked to XSD CMD 6, “VHF 1” will mean nothing to the field units. The links are still in the GIS office, but will potentially be relocated to the supervisor desk in the future. 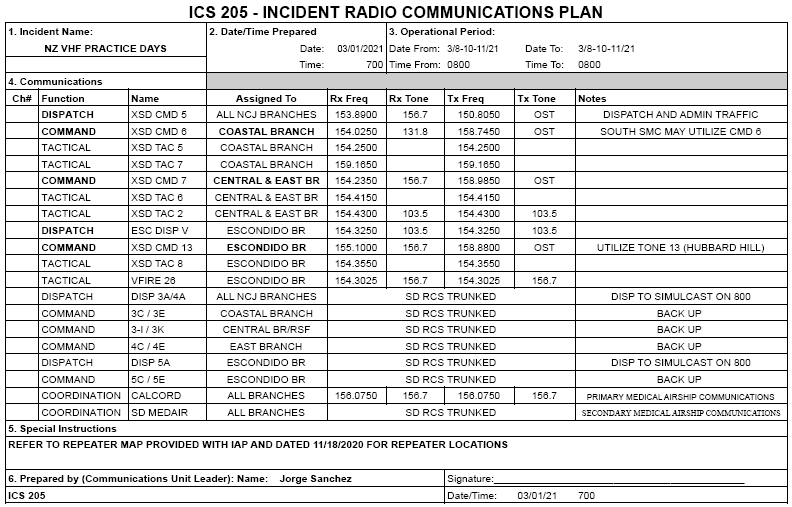 Operational Objectives:
-Improve familiarity with VHF equipment operation, including portable and mobile radios and tone selection
-Expand end user skills, knowledge, and abilities with the use of conventional radio processes

General Situational Awareness:
-VHF/conventional radio equipment does not operate the same as the exisiting 800 MHz RCS based radios. You must be able to adapt to
the different radio systems and excercise your VHF equipment (both mobile and portable) in your response area before you need to use
it. If communications with dispatch becomes a challenge, please adapt and overcome, use the best tones available associated with the
identified repeater that you are using. Test your communications with both dispatch and other field units. Don't expect VHF to have the
same coverage as the RCS, Power and height are key items in areas with poor coverage. The IC may have to spot in a location
away from the incident and remain in their vehicle to use the higher power mobile radio to access an available repeater. If you can't get
through to dispatch on your portable, consider going back to your unit to use the mobile. THIS IAP TO COVER ALL 3 DAYS (MARCH 8,
MARCH 10, AND MARCH 11 2021)

It will be important that users properly prepare themselves for success

Dispatch will be simulcasting each dispatch on 3A and 4A to provide in station radio coverage.

XSD CMD 5 will be used in place of 3-Bravo and 4-Bravo for administrative movements. Crews are reminded to
keep traffic short as this channel is also used for the dispatching of new incidents. If need be, units may landline
dispatch in times of heavy incident dispatching

Try and use your MDC for incident related status changes (e.g. enroute, on scene, AOR, etc.) whenever
possible. If you want to memorialize information about the call, consider self-typing the comment in vs. advising
dispatch over the radio. If you need the dispatcher to view the text, simply advise them to read the CAD notes.

Determine which VHF repeater sites work in your area on both mobile and portable radios. Test with both
Dispatch and other field units. Be prepared to switch tones depending on where you are.

In the event users are unable to access a repeater while on an incident, after attempting all available tones, they
shall utilize 3-Charlie for Coastal agencies, 3-India for Central agencies, and 4-Charlie for East agencies to relay
information to dispatch

Ensure the repeater/direct switch is set for repeat mode on your VHF radio. Use the toggle to switch to direct
when you are on command and only need to talk to units on your scene. You do not need to change the
repeat/direct (talk around) toggle position when operating on a tac channel.

Any unit or IC may request the incident communications plan be returned to the RCS at anytime. Extreme
caution should be utilized if doing this!

YOU DO NOT NEED to provide a report on conditions (RoC) on routine traffic accidents, alarms or other single
unit responses. Provide the RoC when conditions are not as expected and you need additional resources or
when you need to provide instructions to other responding units (e.g. two vehicle TC, E212 take the vehicle in
the center divider).

When communicating with Dispatch, let them know the channel and tone you are using (e.g. “North Com, Chief
2103 on XSD Command 5, Tone 4”). They are listening to multiple channels and the consoles do not light up
like they do when communicating on RCS talk groups. After initial contact, you don’t need to reference the
channel name or tone for that series of conversations, only when you have not communicated recently or on that
incident before.

Due to how conventional radio works (VHF), it is imperative that users switch to tactical nets to provide direct
incident communications that does not need to be transmitted wide area

Interior building coverage will be different from what users experience on the RCS 800 system. Users are
reminded you may need to step outside or near windows. Users can also leverage tactical nets to communicate
with others outside who can then relay radio traffic wide area

If you have VHF speaker mics, get them ready for use and test them on the radio.

Set your command group up on your VHF mobile and portable prior to the practice days. Remember to include
your adjacent command and tacs. Add VFire 26 as that will be used in case outside units come to your incident.

12A will remain the strike team travel channel

Crews will utilize CALCORD for primary air-to-ground with medical ships to increase familiarity- units and medical
airships will not be able to communicate until in the same general area; no wide area coverage

The VHF radios do not have alias’ attached to them. Dispatchers can only go off your announced radio identifier
to determine who you are

Due to Lifeguards not having consistent access to VHF radios, on all incidents with Lifeguards dispatched, the
primary VHF CMD channel will be patched to 3C 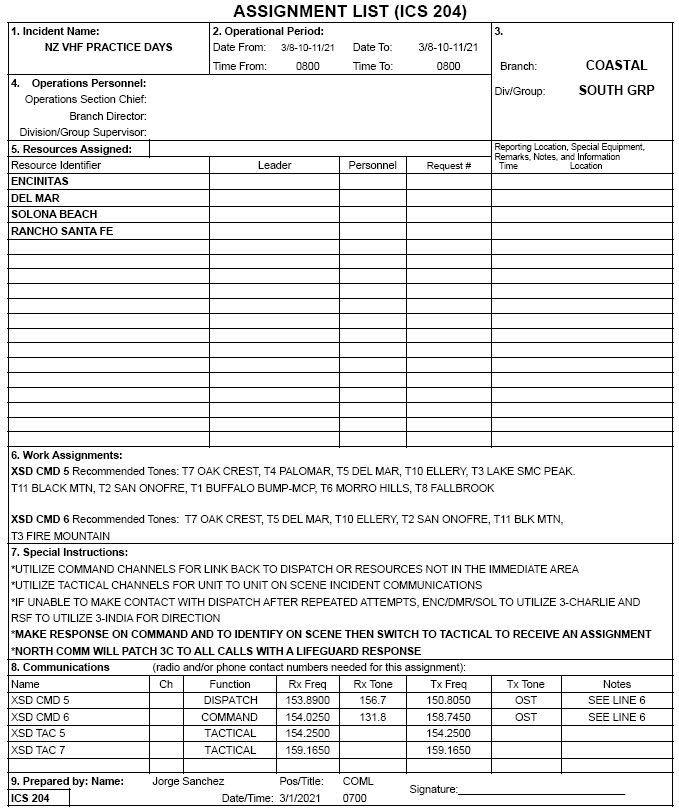 Out of curiosity, ICS 204 Box 6 makes references to Tones for different areas. I presume these are not PL tones, but something else. Is anyone able to clarify what those are referring to?
Top

Will they be doing that for South fire department's also like Heartland, chula Vista etc?
Top
Post Reply
3 posts • Page 1 of 1

Return to “Other Cities Fire Scanning”